Our Self-Guided Tours of Churchill

On October 7th, we set out to discover all that Churchill could offer us by foot. We strolled through the quiet streets (on constant alert for any hungry white bears that may have snuck their way into town) and made our way to Munck Park where we got to dip our fingers in the icy waters of the Hudson Bay for the first time. We paid a visit to the quaint and interesting Eskimo Museum and several souvenir shops before heading back to the B&B to enjoy some delicious homemade cookies and write some postcards to home. That evening we went to dinner with our hosts and roomies at the Lazy Bear Lodge and capped off the night with a drive out to the dog yard for a bonfire; hoping to catch a glimpse of some Northern Lights. Unfortunately, it ended up being a rainy night so the lights weren’t visible but we still got to enjoy the fire and the company of new friends.

The following day we decided to continue our self-guided tour beyond the town centre so we rented an unnecessarily large SUV and spent the day cruising around. First, we stopped by the notorious plane wreck, “Miss Piggy”; this plane (apparently) carrying a cargo of pigs met its rocky demise in 1979. We continued on to the airport (mostly for the well-kept washrooms) and drove by the “Polar Bear Holding Facility” (AKA Polar Bear Jail) – yes, it does exist! Apparently, when we were visiting Churchill, they were holding nearly 14 naughty bears in the facility! Considering that they do not want the bears to be desensitized to the sight of humans, we of course could not go in the facility to confirm the number of inmates but that was the word on the street. Whenever a polar bear finds him or herself wandering too close to town, the Conservation Authority (AKA Polar Bear Police) have to intervene to protect both the humans and the polar bears. If they cannot safely or successfully chase the bear out of town, they will tranquilize the bear so that he/she can be safely transported to the holding facility. Also, if the bear is a known repeat offender, he/she will be placed in the holding facility on sight. Typically, the bears will be held during bear alert season until the Bay freezes over to ensure they will not return to town.

We very, very slowly made our way past the Churchill dump, the abandoned radar station (AKA “the golf balls”), and the ship wreck Ithaca, all the while scanning the rocky landscape for any big furry friends. Although our polar bear search was fruitless, we did end up finding a much smaller white critter; another arctic hare huddled up among the rocks.

We drove all the way out to the Northern Studies Centre (23km east of town) where we just missed the lunch service so we had to settle for a box of girl guide cookies and some fruit punch for lunch as we explored the halls of the centre. The Northern Studies Centre is an independent, non-profit research and education facility which sits in a prime location for viewing and studying the wide diversity of plants, birds, and mammals of the northern boreal forest and tundra.

We made our way back through town and headed west toward Cape Merry which provided stunning views of the Hudson Bay shoreline and the distant Prince of Wales Fort across the Churchill River.

Finally, we finished off our night with a beautiful sunset, some hot drinks and our very first sighting of the Northern Lights! (unfortunately, being the amateur photographers we are, we were unable to snap some good pics of our first viewing – sorry!) 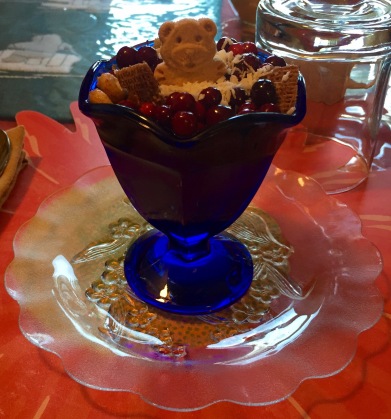 Fun and delicious yogurt for breaky at the Bluesky Bed & Sled!

We encountered several of these Polar Bear Warning Signs as we strolled along the Hudson Bay shoreline in the town of Churchill, MB

We encountered several of these Polar Bear Warning Signs as we strolled along the Hudson Bay shoreline in the town of Churchill, MB

The Enterprise – a herring seiner brought over from Scotland in 1976 – along the shoreline of Hudson Bay at Munck Park, Churchill, Manitoba

The shoreline of Hudson Bay at Munck Park, Churchill, Manitoba

The shoreline of Hudson Bay at Munck Park, Churchill, Manitoba

The Eskimo Museum in Churchill, Manitoba

The quiet streets of Churchill, MB

Writing our postcards to home!

Dinner with our kind hosts and roomies at the Lazy Bear Lodge in Churchill, MB.

Campfire out at the dog yard; hoping for a glimpse of the Northern Lights in Churchill, MB.

This is the narrow and winding road that took us out of the town of Churchill and along the Hudson Bay shore. 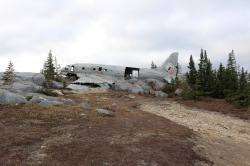 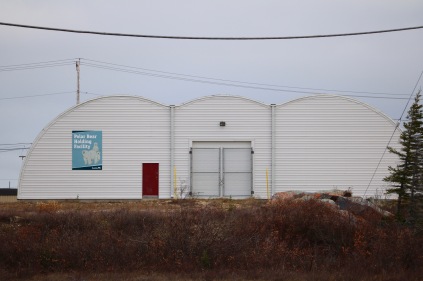 A fluffy little arctic hare cuddled up in the rocks along the Hudson Bay shoreline, Churchill, MB

In the distance is Ithaca, the small freighter that was shipwrecked in Bird Cove in 1960.

The abandoned radar station, AKA “the golf balls” in Churchill, MB

Having forget to pack a lunch on our little roadie around Churchill, we ended up having some delicious Girl Guide Cookies and fruit punch for lunch… I guess that’s what you get when you visit the Northern Studies Research Centre outside of the scheduled lunch hour! 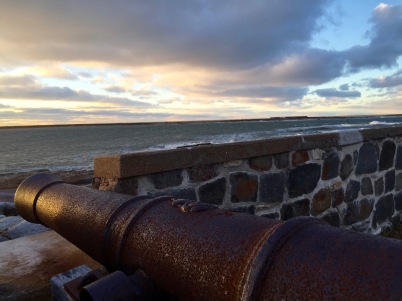 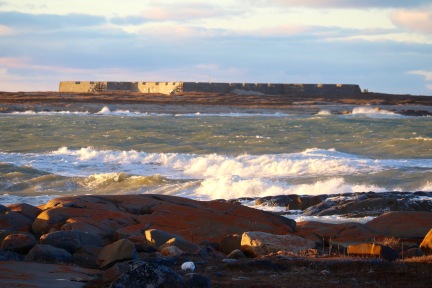 View of the Prince of Wales Fort in the distance from Cape Merry (notice a small furry friend in the foreground?)

The abandoned former Port staff house that used to house employees as well as a local TV station in Churchill, MB 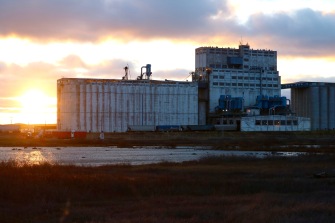 We stopped by the Lazy Bear Lodge for some warm drinks after exploring the shoreline in our rental truck.

7 Comments on “Our Self-Guided Tours of Churchill”