On our second stop-in to Edmonton, Alberta, we stayed at a beautiful old home in the trendy neighbourhood of Strathcona. We explored the city by bicycle and foot and met up with some familiar faces for good laughs and good burgers.

We also couldn’t pass up our last chance for big shopping at West Edmonton Mall – a city in itself. Skating rinks, swimming pools, roller coasters, and shoes!

From here, with our tiny car stuffed to capacity we excitedly headed onward and upward to the Great White North. We drove through endless farmlands and the many logging communities of Northern Alberta. The excitement of approaching our final destination was building and building as we passed by the first few cars with license plates shaped like polar bears! Our first stop before the border was in High Level, AB which functions well as a rest stop for travellers headed north as it is about halfway between Edmonton and Yellowknife and appropriately equipped with a variety of hotel/motel chains.

The next day, we headed out early and reached the 60th parallel and the border of Northwest Territories! As we drove along the highway west of (the appropriately named) Wood Buffalo National Park, we crawled past several herds of buffalo grazing along the highway. After approximately 7.5 hours of driving, we finally arrived in our new hometown of Yellowknife, Northwest Territories!

Upon arrival to the capital city, we discovered that our brand new condo apartment was not yet move-in ready. Although this came as a surprise to us, our new neighbours ensured us this is a familiar and typical occurrence in YK as they affectionately joked, “Welcome to the North!”

Luckily, our landlords arranged for us to stay in a cute little cabin in Yellowknife’s historic Old Town. Home Sweet (temporary) Home. 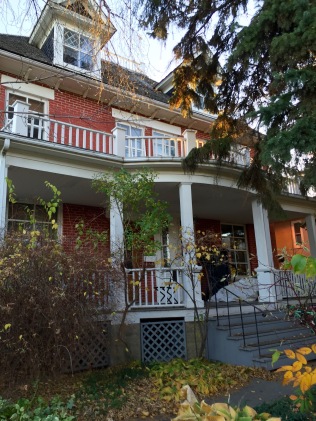 Our humble abode in Old Strathcona 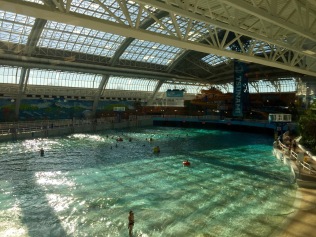 View of downtown Edmonton from across the North Saskatchewan River

Our first glimpse of the iconic polar bear license plates of NWT!

The trees are looking bare in Northern Alberta

One of the many, many Northern Alberta beaver lodges we drove by

Finally made it to our rest stop in High Level, AB

We finally made it to the 60th parallel and the Alberta/NWT border!!

This bridge (known as the Deh Cho Bridge) crosses over the Mackenzie River which is the longest and largest river system in Canada. Before this bridge was built in 2012, there was no official road access to Yellowknife. They used to have to take a ferry or ice road across the river which meant during a handful of weeks during freezing and break up, travellers were restricted to flying in or out of the city. This also made the cost of goods in the city much more pricey than they are today. Thank you, Deh Cho Bridge!

Buffalo grazing along the highway in NWT

Buffalo grazing along the highway in NWT

Made it to Yellowknife, Northwest Territories!!